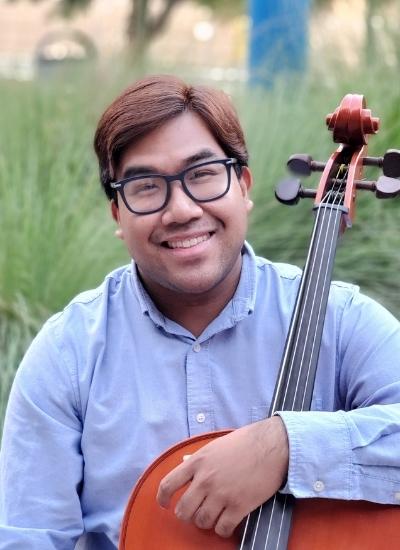 A native of Glendale, California. Kevin started learning violin at his local elementary school in fourth grade, following with viola, cello and contrabass not long after. It was not until his high school years where he truly found his passion for music by his music director Mrs. Amy Rangel. He had then picked up trumpet and marched in his school’s band in competition for two years. In 2015 Kevin got his first violin teacher Barbara Don, and then from 2016-2020 studied under Tamsen Beseke, the inventor of the famous shoulder rest, “Acoustifoam” and Elizabeth Hedman from Pasadena City college, on both violin and viola. Since Kevin had the advantage of learning the string family, he used this as his tool to help his local middle school, Roosevelt middle school, under the direction of Ashely Suhr, where he had attended as a youth. He has been participating as their assistant music director and string technician since he graduated high school in 2016. Kevin has also participated in a wide set of orchestras throughout the years such as “Crown City Symphony, West Coast Symphony and Numi Opera and Filipino American Symphony Orchestra” This is Kevin’s second year as a transfer student to CSUN and his second year in the CSUN Honors String Quartet, pursuing his B.M in Violin/Viola Performance, studying with Lorenz Gamma.